HAPPY EASTER! TODAY WE HELP YOU GET TO KNOW YOUR FUN TEAM MEMBER, TERRY! 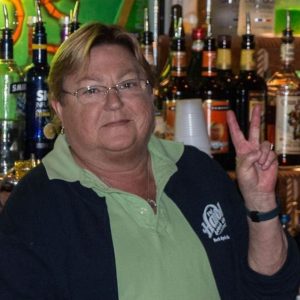 Hey! It’s laid back Sunday…And that means we’re going to let you get to know another one of your FUN TEAM. Today, we’re showcasin’ Terry Jensen, better know as Little Terry! Terry was born and raised in Falls Church, Virginia, but has been a local here in Ocean Drive for quite a while. See for yourself!

Question #1: When did you come to work at Fat Harold’s..and which club?
Terry: The old Spanish Galleon back in the late 70’s.

Question #2: What’s the funniest interaction with a customer at Fat Harold’s?
Terry: One cold winter Sunday during Customer Appreciation Day, a long time ago..I had about 5 customers. In walks a guy…walks back and forth in front of the main bar. I say “can I help you?”. He says “are you open?” I say “don’t you think that’s a silly question?”..And he says “No, Duck’s isn’t open”. I told him this was Fat Harold’s, not Ducks..and he just walks out while my customers just stared at him. Another funny..I was asked for a Bachelorette Tiara last Saturday.

Question #3: What do you see yourself doing 5 years from now?
Terry: Same as now, just a little less.

Question #4: How would you describe yourself?
Terry: Different…an explorer…a truth seeker…what you see if what you get.

Question #6: As a child what did you want to be when you grew up?
Terry: A writer and a doctor. I wanted to be EVERYthing.,..Still do.

Question #9: Your favorite music, dance or band in high school?
Terry: Joni Mitchell, Crosby Stills Nash & Young. I loved and studied all forms of music…from classical to the blues..Even got to meet Segovia in person!

Question #10: Your first job, and how old were you?
Terry: Drug Fair #10, Bailey’s Crossroads, Virginia.

Question #11: Funniest thing that ever happened to you during your lifetime?
Terry: After a busy night bartending at the old Galleon, and then drinking all night, we went to the beach in the morning to sleep. While asleep in my bikini, I stretched and my top came down to my waist. I woke up and went down to the ocean (it was low tide) for a dip. When I turned to come back after body surfing for a while everybody in the group was laughing. I realize I had just flashed the entire beach. Not ashamed…not embarrassed…just laughing proudly! Ah! To be young again!

Question #12: What do you like to do in your spare time?
Terry: The sound of silence! Read non-fiction, listen to contemporary Christian music. Sit on the beach soaking up Vitamin D…Think about everything..and nothing.

Question #13: Most embarrassing moment in your life?
Terry: Never had one…too busy laughing!

Question #14: Is there anything you would like to do or accomplish in your life that you haven’t done?
Terry: Working on my memoirs…seriously..and I hope to never finish it. Wanted to see Machu Pichu but I know I won’t this time around. I flew a plane for a short while one time when the pilot was unconscious.

Question #15: Can you share something personal that most folks don’t know about you?
Terry: When I was younger I played Classical Guitar before becoming a bartender. Arthritis set in. I’m not afraid of anything…and I can never be bored.

Well, there you have it! Terry is quite a character and loved by many here at Fat Harold’s. You’re likely to see her anywhere on the beach,..usually riding her scooter. Be sure to say hey when you see her…and if you miss her, you can usually find her at the Main Bar here at Fat Harold’s!

Club opens today at 4 with Customer Appreciation Day from 4 to 7. We hope you’re all having a FANtastic Easter Sunday and let’s not forget the reason we celebrate it. It ain’t all about the Easter bunny!